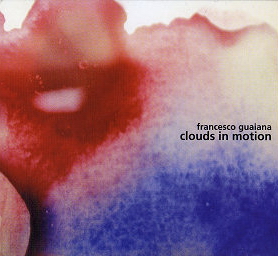 …The ‘CLOUDS IN MOTION’ performance is a particular event, through which I mean “to build ” a sonic environment using particular electronic effects along with my guitar. By overlapping various layers of sounds and noises I create “a sonic wall” using the concept of the repetitive cycle, a sonic wall that maintains constant, static that never resolve and that it represents the state of permanent search to which the contemporary man and society is drag to. The music I compose or improvise live is also inspired by the concept of “lightness” and
helps me and hopefully the listeners to lose the sense of gravity and to feel a sense of “lightness” that makes me (them) escape from the heavyness of everyday life. The Cd “Clouds in Motion” reflects this concept and includes also a few compositions I sometimes use as interludes or as “inputs” to develop new live improvisations. The live performance is carried out in a frame of time of approximately 75 minutes, it begins with few notes, scattered, without a precise harmonic or melodic logic, proceeding therefore to the realization of an intense huge sonic texture, that after have reached an apex it will begin to fade out and to disappear and introduce silence, or can suddenly stop leaving no evidence to a possible “resolution”…”